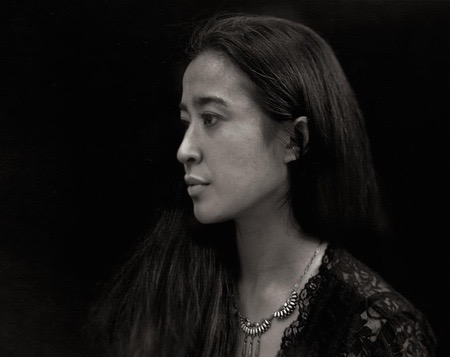 Saya Woolfalk (born in Japan, 1979) is a New York based artist who uses science fiction and fantasy to re-imagine the world in multiple dimensions.  With the multi year projects No Place, The Empathics, and ChimaTEK, Woolfalk has created the world of the Empathics, a fictional race of women who are able to alter their genetic make-up and fuse with plants. With each body of work, Woolfalk continues to build the narrative of these women's lives, and questions the utopian possibilities of cultural hybridity.

She has exhibited at PS1/MoMA; Deitch Projects; Contemporary Art Museum, Houston; Contemporary Arts Center, Cincinnati; the Brooklyn Museum; Asian Art Museum, CA, Museum of Contemporary Art, Chicago; the Studio Museum in Harlem; the Frist Center for the Visual Arts; The Yerba Buena Center; The Newark Museum; Third Streaming; MCA San Diego; MoCA Taipei; and Performa 09; has been written about in the New Yorker, Sculpture Magazine, Artforum, ARTNews, The New York Times, Huffington Post and on Art21’s blog; and has also worked with Facebook and WeTransfer.  Her first solo museum show The Empathics was on view at the Montclair Art Museum in the Fall of 2012.  Her second solo museum exhibition ChimaTEK Life Products was on view at the Chrysler Museum of Art in the fall 2014.  She recently completed a new video installation commission for the Seattle Art Museum, and is a recipient of a NYFA grant in Digital/Electronic Arts.  She is represented by  Leslie Tonkonow Artworks + Projects, NYC and teaches in the BFA and MFA programs at Parsons: The New School for Design.