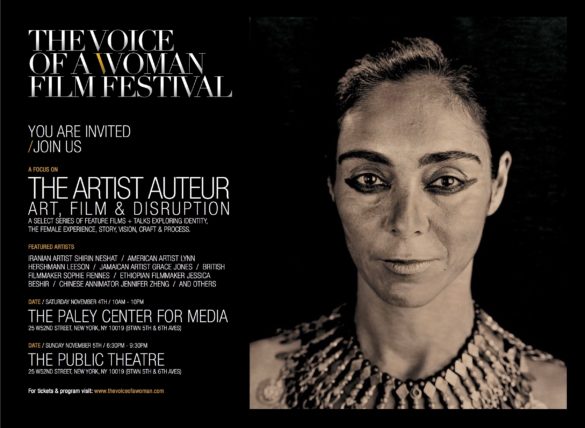 The story I want to share with you is my challenge as an Iranian artist, as an Iranian woman artist, as an Iranian woman artist living in exile. Well, it has its pluses and minuses. On the dark side, politics doesn't seem to escape people like me. Every Iranian artist, in one form or another is political.  Politics have defined our lives. If you're living in Iran, you're facing censorship, harassment, arrest, torture -- at times, execution.  If you're living outside like me, you're faced with life in exile -- the pain of the longing and the separation from your loved ones and your family.  Therefore, we don't find the moral, emotional, psychological and political space to distance ourselves from the reality of social responsibility.

Oddly enough, an artist such as myself finds herself also in the position of being the voice, the speaker of my people, even if I have, indeed, no access to my own country.  Also, people like myself, we're fighting two battles on different grounds.  We're being critical of the West, the perception of the West about our identity -- about the image that is constructed about us, about our women, about our politics, about our religion.  We are there to take pride and insist on respect and at the same time, we're fighting another battle, that is our regime, our government -- our atrocious government, that has done every crime in order to stay in power.  Our artists are at risk.  We are in a position of danger.  We pose a threat to the order of the government.

But ironically, this situation has empowered all of us, because we are considered, as artists, central to the cultural, political, social discourse. We are there to inspire, to provoke, to mobilize, to bring hope to our people.  We are the reporters of our people, and are communicators to the outside world.  Art is our weapon.  Culture is a form of resistance.  I envy sometimes the artists of the West for their freedom of expression.  For the fact that they can distance themselves from the questions of politics. From the fact that they are only serving one audience, mainly the Western culture.  But also, I worry about the West, because often in this country, in this Western world that we have, culture risks being a form of entertainment.  Our people depend on our artists, and culture is beyond communication.

My journey as an artist started from a very, very personal place.  I did not start to make social commentary about my country. While I was absent from Iran, the Islamic Revolution had descended on Iran and had entirely transformed the country from Persian to the Islamic culture.  I came mainly to be reunited with my family and to reconnect in a way that I found my place in the society.  But instead, I found a country that was totally ideological and that I didn't recognize anymore.  More so, I became very interested, as I was facing my own personal dilemmas and questions, I became immersed in the study of the Islamic Revolution -- how, indeed, it had incredibly transformed the lives of Iranian women.  I found the subject of Iranian women immensely interesting, in the way the women of Iran, historically, seemed to embody the political transformation.  So in a way, by studying a woman, you can read the structure and the ideology of the country.

So I made a group of work that at once faced my own personal questions in life, and yet it brought my work into a larger discourse -- the subject of martyrdom, the question of those who willingly stand in that intersection of love of God, faith, but violence and crime and cruelty.  For me, this became incredibly important.  And yet, I had an unusual position toward this.  I was an outsider who had come back to Iran to find my place, but I was not in a position to be critical of the government or the ideology of the Islamic Revolution.  This changed slowly as I found my voice and I discovered things that I didn't know I would discover. So my art became slightly more critical.  My knife became a little sharper.  And I fell into a life in exile.  I am a nomadic artist.  I work in Morocco, in Turkey, in Mexico.   I go everywhere to make believe it's Iran.

"Women Without Men" returns to history, but another part of our Iranian history.  It goes to 1953 when American CIA exercised a coup and removed a democratically elected leader, Dr. Mossadegh.  The book is written by an Iranian woman, Shahrnush Parsipur.  It's a magical realist novel.  This book is banned and she spent five years in prison.  My obsession with this book and the reason I made this into a film, is because it at once was addressing the question of being a female -- traditionally, historically in Iran -- and the question of four women who are all looking for an idea of change, freedom and democracy -- while the country of Iran, equally, as if another character, also struggled for an idea of freedom and democracy and independence from foreign interventions.

I made this film because I felt it's important for it to speak to Westerners about our history as a country.  That all of you seem to remember Iran after the Islamic Revolution. That Iran was once a secular society, and we had democracy, and this democracy was stolen from us by the American government, by the British government.  This film also speaks to the Iranian people in asking them to return to their history and look at themselves before they were so Islamicized -- in the way we looked, in the way we played music, in the way we had intellectual life. And most of all, in the way that we fought for democracy.

The film tried to find a balance between telling a political story, but also a feminine story. Being a visual artist, indeed, I am foremost interested to make art -- to make art that transcends politics, religion, the question of feminism, and become an important, timeless, universal work of art. The challenge I have is how to do that.  How to tell a political story but an allegorical story.  How to move you with your emotions, but also make your mind work.  The green movement -- the summer of 2009, as my film is released -- the uprising begins in the streets of Tehran.

What is unbelievably ironic is the period that we tried to depict in the film, the cry for democracy and social justice, repeats itself now again in Tehran.  The green movement significantly inspired the world. It brought a lot of attention to all those Iranians who stand for basic human rights and struggle for democracy.  What was most significant for me was, once again, the presence of the women.  They're absolutely inspirational for me.  If in the Islamic Revolution, the images of the woman portrayed were submissive and didn't have a voice, now we saw a new idea of feminism in the streets of Tehran -- women who were educated, forward thinking, non-traditional, sexually open, fearless and seriously feminist.  These women and those young men united Iranians across the world, inside and outside.

I then discovered why I take so much inspiration from Iranian women.  That, under all circumstances, they have pushed the boundary.  They have confronted the authority.  They have broken every rule in the smallest and the biggest way.  And once again, they proved themselves.  Iranian women have found a new voice, and their voice is giving me my voice.  And it's a great honor to be an Iranian woman and an Iranian artist, even if I have to operate in the West only for now.