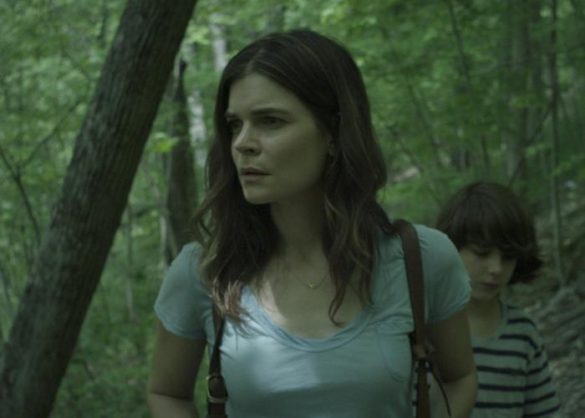 Three weeks after Claire’s husband has mysteriously disappeared, the police have ended their investigation and her son is beginning to grieve. The only person who hasn’t given up is Claire. Soon she discovers his troubling secrets, including an alluring yet manipulative graduate student with whom he had formed a close bond. As she digs deeper, Claire begins to lose her grip on how well she truly knew her husband and questions her own identity in the process. Claire in Motion twists the missing person thriller into an emotional take on uncertainty and loss.LISA ROBINSON and ANNIE J. HOWELL
Co-Writers, Co-Directors, Producers

With this film, we were interested in telling a story about something that’s been lost — both physically and spiritually. It was intriguing to give Claire a life crisis that leads to a bigger mystery, one that unravels her perception of all she knows to be true. We wanted this experience to be closely-observed and to bring intimacy to every element of the film: the acting, the landscapes, and especially the camerawork.

The world of the Appalachian Ohio college town where the story is set, with its lonely streets and manicured homes, imposing rocky cliffs and dark forests, are all filtered through Claire’s slowly destabilizing mind. Her quest to understand her shifting world after a crisis is a metaphor for more universal questions: How do we keep changing throughout our lives? How does our own change and behavior surprise those closest to us, or even ourselves? Can we ever really know anyone? These were the ideas that we explored through the writing and directing of Claire in Motion.

Lisa Robinson and Annie J. Howell’s debut feature, Small, Beautifully Moving Parts, premiered at SXSW in 2011 and went on to play over thirty festivals. Awards include the Alfred P. Sloan Feature Film Prize at the Hamptons International Film Festival and the Audience Award at RiverRun Film Festival. Garnering praise from Variety, NPR, as well as the late Roger Ebert, the
film opened theatrically in New York and went on to play several other markets. Howell and Robinson have each directed other short work, including Tia and Marco and Hollow respectively for the vanguard ITVS series FutureStates. Robinson’s awards include Martin E. Segal Prize, the Mitsubishi Digital Media Lab Award, and a New York Foundation for the Arts Fellowship. Howell’s awards include a Screenwriters’ Colony fellowship, an IFP Grand Prize for an original script, and a 2010 San Francisco Film Society/Kenneth Rainin Foundation grant. Robinson has original screenwriting credits with the renowned Blue Man Group; Howell’s screenplay Little Boxes premiered this spring.